The underground wine making city of Cricova, which has become the emblem of Moldovan wine-making, has galleries stretching for 70 km, with symbolic street names: Dionysus, Fetyaska, Cabernet Sauvignon, etc. Cricova cellars are located eleven kilometers from the city of Chisinau, cut in natural limestone, at the depth of 35-80 m. In the cellars 30 million liters of wine are stored at the constant temperature of 12-14C and the humidity of 97-98%.

Founded in 1952, the plant Cricova is the largest producer of sparkling wines by traditional Moldovan technology, the maturation of which takes place entirely in the underground cellars. In Cricova the State Vinotheque is stored – a wonderful collection of legendary wines, both local and foreign. The wine cellar originates from the collection of Goering’s wines, among which there are famous wines Moselle, Burgundy, Bordeaux and Porto. The oldest wine in the collection and the only one of this kind in the world is the wine Easter Jerusalem produced in 1902. The cellars are declared a national cultural heritage at the legislative level. 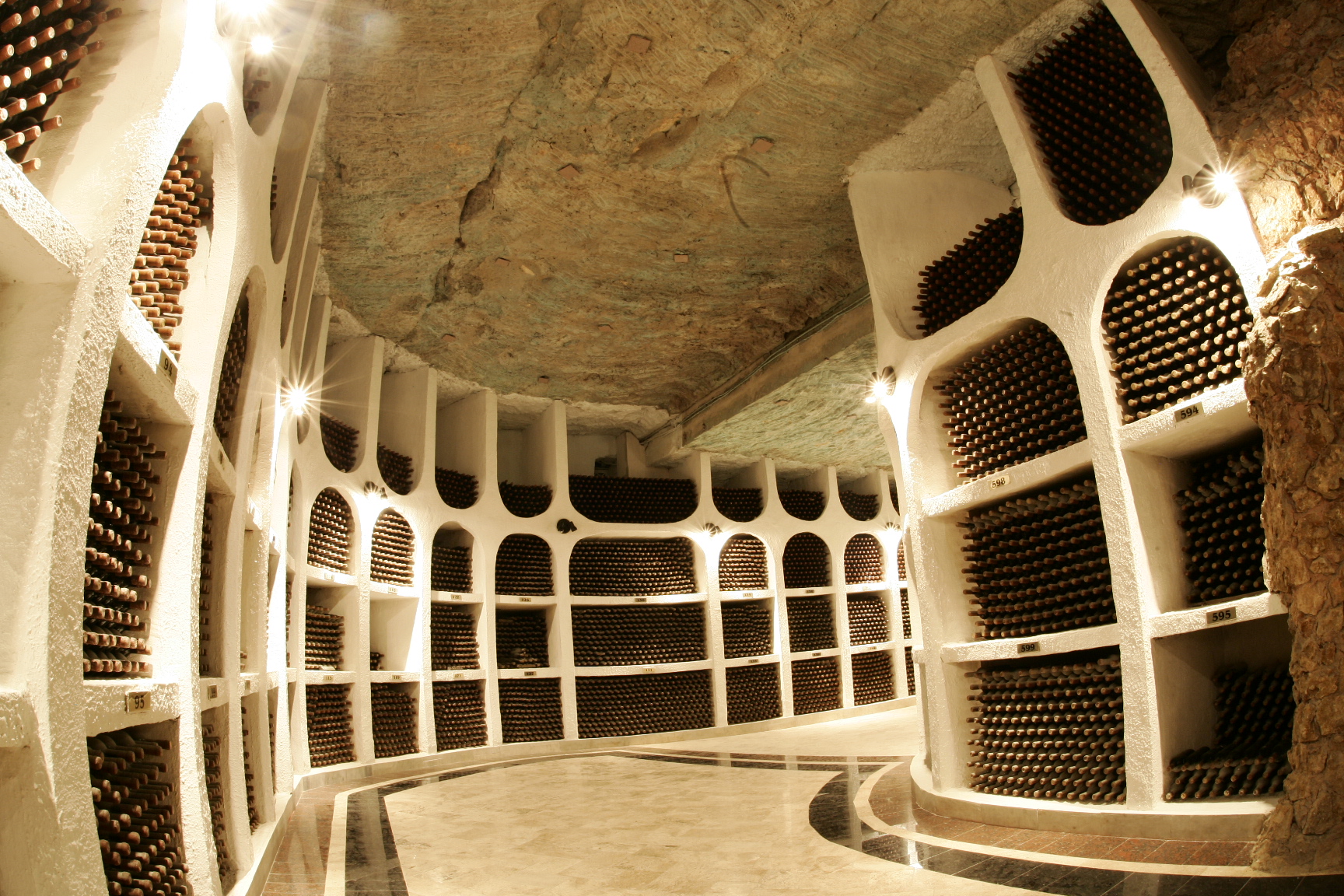 In Duruitoarea Veche, Rîșcani district there are unusual gorges and waterfalls, and a huge water reservoir Costesti-Stinca, and a wide river by Moldovan scale. But the most unusual thing is one of the largest grottoes in Europe. Moreover, in the grotto the oldest man’s site in Europe was discovered. Also the grotto is just beautiful, and it offers stunning views of the surrounding area. 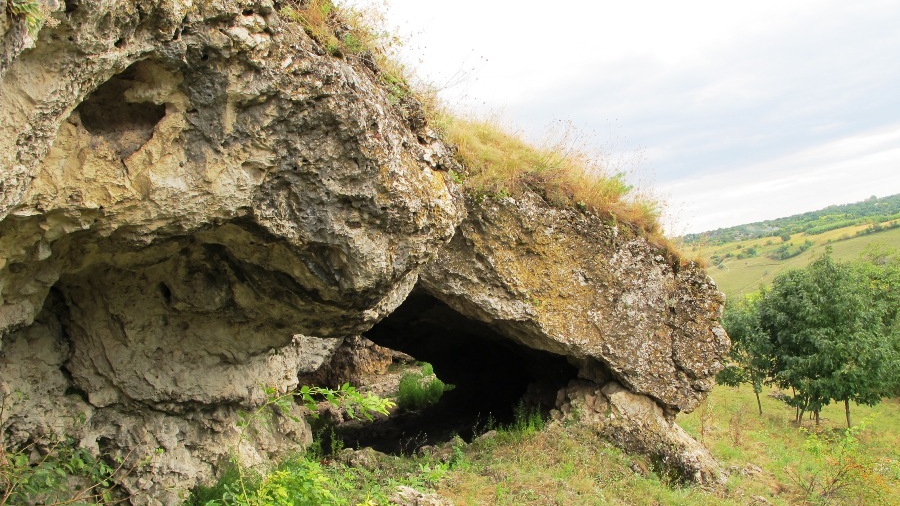 In the village of Vornicheni, Străşeni district – one of the oldest localities of Moldova, which is mentioned in the documents of 1420 and has existed since 1402 – a few years ago a huge kiln for firing ceramics was discovered. Scientists have put forward a version that these furnaces are about 600 years old, and that Tatars built such constructions for firing pottery. Such furnaces have survived neither in Ukraine nor in Romania, nor, in fact, in the "rest" of Balkans. 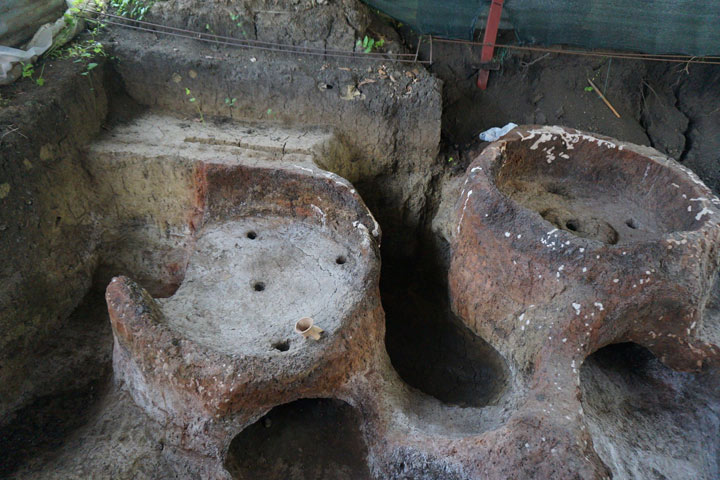 The famous karst gypsum cave Cinderella in 1991 by the decision of the Government of the Republic was renamed after Emil Racovitza. The descending and especially the ascending the narrow stairs of the well is quite challenging, particularly, due to the fact that the cave has its own, special microclimate. An absolute darkness reigns in the cave. The floor and walls of the cave are covered with a layer of liquid clay in many places, so one won’t be able to get out of it in clean clothes. The entrance into the cave to anybody alone is prohibited, being accompanied by an experienced instructor who knows the conditions of the cave and its topography is a must. A beginner can easily get lost in it. In addition, special clothing and shoes, lighting and helmet are required.

In total, there are about 20 lakes in the cave; the most remarkable of them being Blue Lake and Green Labyrinth.

In some halls of the cave there are some figures sculpted from the local multi-colored clay by speleologists. So, in the Hall of Chernivtsi Speleologists there is the famous statue of Cinderella. There is a sculpture of a Dinosaur, a Horse, a Mouse. These figures serve as a kind of milestones for inexperienced researchers. This is the 13-storey underground bunker of the Soviet era, which is located in the forest village of Olișcani. Şoldăneşti bunker is one of the largest on the territory of the former Soviet Union. The reserve command post of the General staff of the armed forces of the Warsaw Pact was supposed to be there. In the case of a nuclear explosion the KP was to provide up to 24-hour full isolation.

The bunker consists of two cylindrical blocks, each one with the diameter of 36 and the depth of 60 meters. The height of the ceilings in the rooms is 4-5 meters; the walls are made of steel. In some places the underground water has penetrated into the bunker, and now the walls are covered with moss. The construction of a military base in the woods of Olișcani stopped 20 years ago, together with the collapse of the Soviet Union. There are two more exactly the same complexes in Belarus and Azerbaijan.

For many years the fact that the Ungheni Bridge was built by Eiffel was unknown to the public and even to the local historians. But this bridge was widely known during the period of the national consciousness growth and was famous as Podul de Flori (Flower Bridge). In the late 80’s and early 90’s Romanians from the both banks of the Prut were walking on the bridge carrying flowers instead of trains and fraternized, unaware that they were going almost over the Eiffel tower.

Beleu is a relict lake, i.e. the part of the water area that arose as a result of the separation from the sea due to tectonic movements. It happened 5-6 thousand years ago, when most of the Danube delta was under the waters of the Black sea. Its shores are richly covered with reeds and willows, and around the lake the grass characteristic of flood meadows grows. The lake's area is 626 ha, and with the flood meadow it’s all 2000 ha. The place is comfortable for the waterfowl. Being located relatively close to the Danube delta, the lake lies on a large migratory route, all in all 168 species of birds are registered in Beleu. Its depth is up to 2 meters, 30 species of fish are found in it. It is also home to such mammals as otter, European mink. In the district 160 species of plants grow. The view of the lake is impressive. Its length stretches for 5 km; in the widest places it is up to 2 km. Having sailed on the boat into the middle of the lake one will hardly see the banks. If it's foggy you'll get lost. Sometimes they searched for lost people for days. 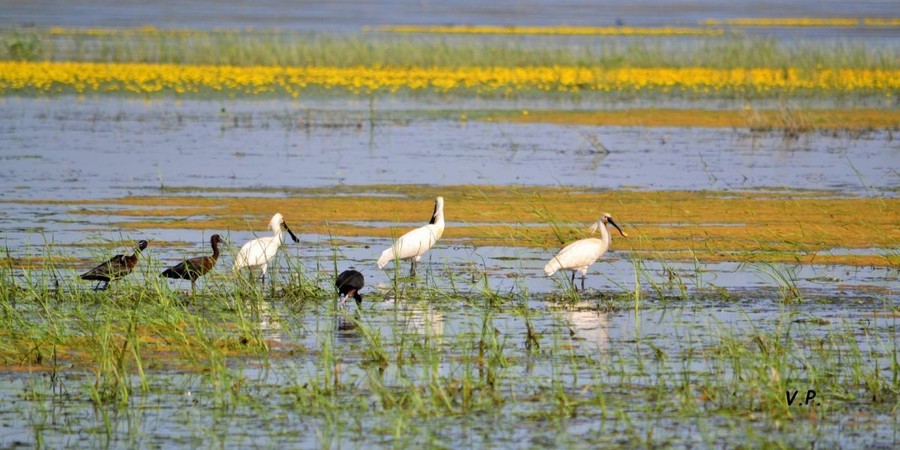 Directly outside the fence of the Hirjauca monastery (in the village Hirjauca) a wonderful area of the old beech forest starts. They say that for the construction of the monastery a special place was chosen where anyone was able to recover from a disease, whether it was physical or spiritual. And today there is a well-known Fountain of Youth. According to the legend the water in it has healing properties.

Old Mill in the Village of Beșalma

In the Gagauz village of Beșalma, Comrat region there is the only preserved almost intact wooden windmill of the mid-nineteenth century. It is impressive. It has been standing here for about a century and a half. The mill is still in the working condition and it is sometimes started. The foundation of the mill is made of stone, and the base and blades are made entirely of wood, which has already turned black from time. Inside the mill there are mechanisms that set the millstone in motion. It is equipped with a wheel which increases its balance. Usually the measurement of corn and flour was carried out by using a wooden tub with a capacity of 21 kg. The payment for grinding the grain was carried out, as a rule, in the form of exchange - the owner of the mill took from the large tub one vessel which contained 1 kg of the product. Today it does not work as a real mill, but instead it is an intriguing tourist attraction. 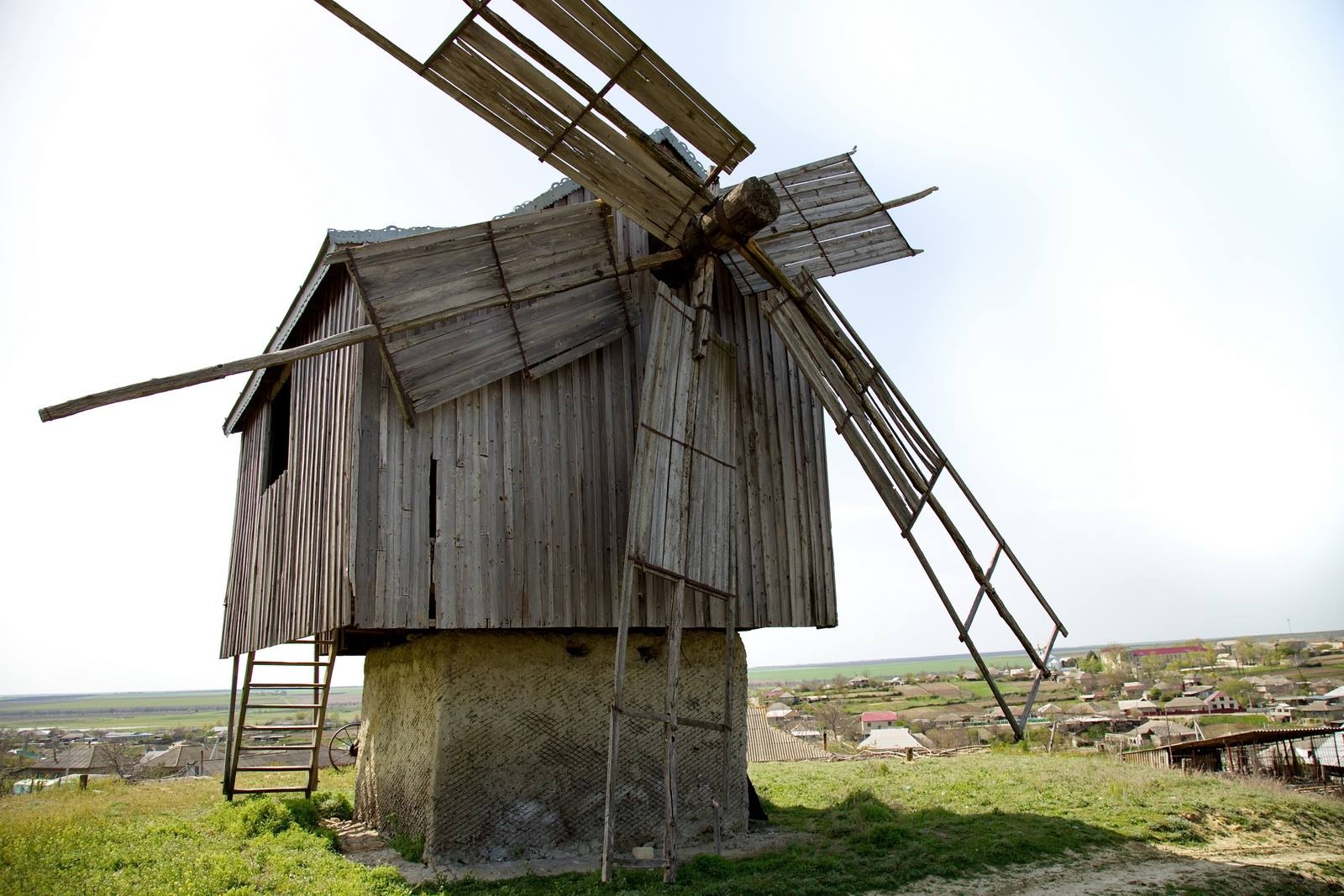 Toltras are picturesque limestone hills and ridges; they are much older than the Carpathian Mountains. These are the barrier reefs of the ancient sea which appeared 15-20 million years ago when the Tortonian and Sarmatian seas disappeared. The microclimate formed by the toltras and canyons of rivers creates favourable conditions for the preservation of rare and relict plants, including a large number of medicinal ones. 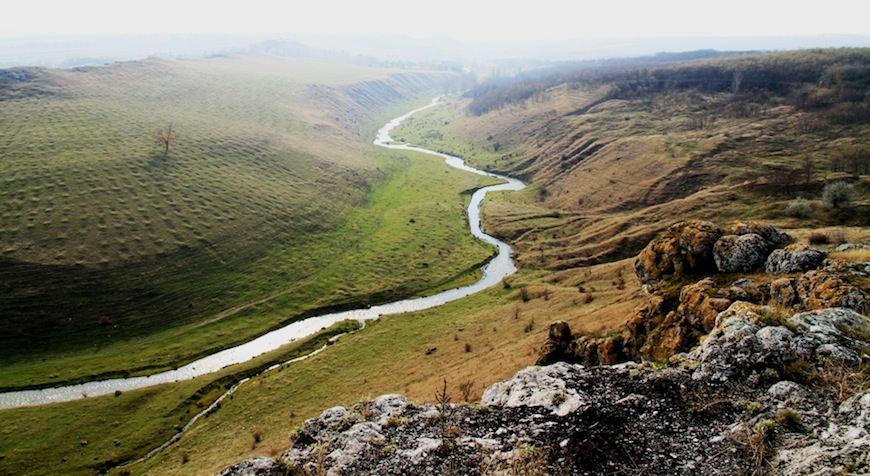 A unique reserve of untouched virgin Budjac steppe has been functioning in Comrat since the Soviet times. The protected area is also a reserve of medicinal herbs. Its uniqueness lies in the fact that on its territory the grass has never been mowed, as well as it has not been used as a pasture. The territory is registered with the United Nations (UN). Every five years the reserve's seed crop is mowed and exported abroad. In total, there are about 80 species of medicinal herbs on the reserve area. The territory is protected by the Environmental Agency of Gagauzia.

The village of Naslavcea is located on the high picturesque hills; it makes an impression of a real mountain village. On the left bank of the stream Chisărău, a mile from its mouth there is Carpov Iar, a paleontological monument (in the context of the ravine there are black shales with phosphorites, thin layer shales with the prints of the Sarmatian fish and plants). On this site the main attraction is picturesque natural landscapes.

Karpov Iar is another amazing natural monument which can be visited in Naslavcea. It is located about two kilometers from the mouth of the river Chisărău. It was taken under the protection of the state in 1962 as the traces of flora and fauna of an ancient era were found in it – here one can see a big number of prints of ancient plants and fishes. Thanks to Сarpov Iar about 60 species of plants and 10 species of fish were studied. Nearby there are Nagoryansky caves. In the past, these caves served as a shelter for local residents against the invasion of the Tatars. In the Soviet times on the stone of one of them an unknown artist carved the portrait of Taras Shevcenko. 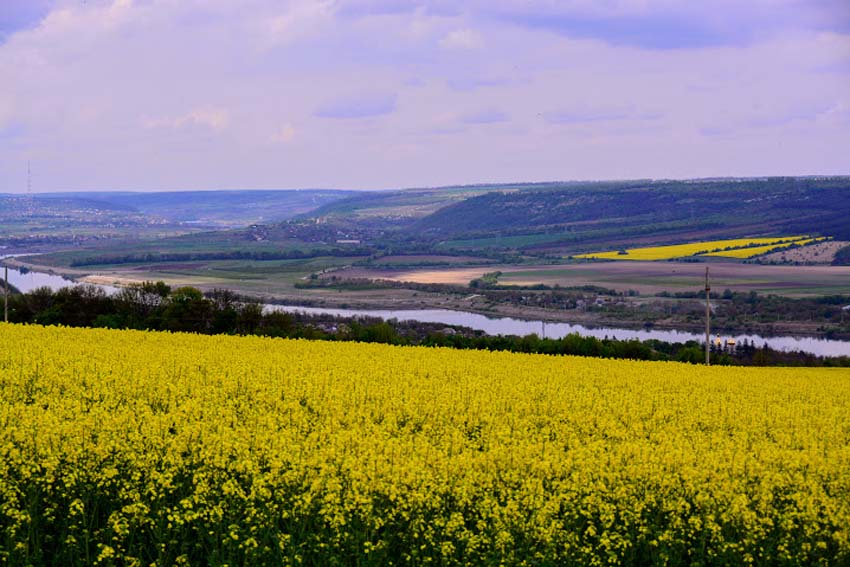